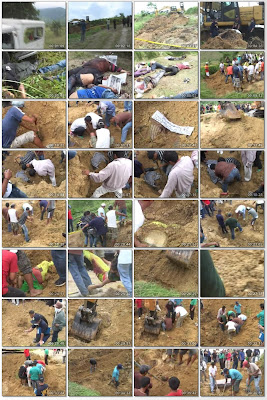 DAVAO CITY -- Bootleg digital video disc (DVD) copies of the “Maguindanao Massacre 11/23/09,” are now being sold underground in many parts of Mindanao, according to those who have seen the "film."

The Philippine Daily Inquirer was able to get a copy of the DVD. Running over four hours, the DVD showed the actual retrieval of the bodies from the massacre site at Barangay Salman, Ampatuan town, Maguindanao.

It showed the blood-soaked, bullet-riddled and mutilated bodies of the Ampatuan massacre victims. Most of the footage had graphic images of body parts protruding from the earth.

The origin of the Maguindanao Massacre DVD is not known but a DVD vendor in Koronadal City said he got his stocks from a supplier in General Santos City.

The INQUIRER secured a copy of the film, sold at P120, from a vendor who requested that he be not named, saying he feared for his life.

“Please don’t tell anyone that you got it from me…I only gave you this because I trust that you will not tell that it came from me. It’s scary,” the vendor said, referring to the movie. “Nakakatakot…sobrang nakakatakot. At nakakadiri (It’s really scary and it’s gross),” he said.

The vendor indicated he was also scared of the Ampatuan family, whose key members have been charged in connection with the massacre and were the erstwhile allies of Malacañang.

The material contained the first two days of the retrieval operations conducted by the authorities after the November 23 abduction and grisly murder of at least 57 civilians, 31 of them journalists and the rest close relatives and supporters of Buluan Vice Mayor Esmael Mangudadatu, a Maguindanao gubernatorial candidate running against the Ampatuans in the 2010 elections.

It is not clear whether the content of the DVD was from the documentation done by the team that conducted the retrieval operations.

The DVD opened with the convoy of the retrieval operations team that traveled to the dumping site in Barangay (village) Salman. Immediately after, the amateur camera captured the yellow backhoe excavator that had the marking “Under the Administration of Datu Andal Ampatuan Sr.”

For more than four hours, the camera focused on the excavation of the victims. First to be exhumed was a woman, believed to be one of the lawyers of Buluan Vice Mayor Esmael Mangudadatu, who wore a brown-striped blouse.

After the first body was recovered, a man was also overheard as saying: “May ara pa (Are there still more)?”

“May ara pa gid. Marami yan sila dyan…(There would surely be more. There are a lot of them buried there),” another man answered.

When the body of a woman, wearing a green blouse and yellow pair of pants, was exhumed, a voice was heard saying: “Ka-daming tama…”

And judging from the looks of the victim, the same man suspected that she may have been sexually abused.

There were at least eight men who were exhuming the bodies, using shovels and their bare hands alternately. The film showed the lousy and slipshod retrieval of bodies and evidence, done by non-experts. It was only in the latter part of the first day and the second day that police experts got to work in the retrieval operations.

When shovels and bare hands proved to be slowing down the retrieval, the authorities later decided to use the backhoe to dig the grave where the victims were dumped. It was then that more and more bodies were found, including that of Mangudadatu town Vice Mayor Eden Mangudadatu, sister of Esmael.

Eden was immediately identified by the men involved in the diggings. A mobile phone was also recovered and a man was overheard as saying that “gitago nya sa loob ng sapatos. (she hid it inside her shoe).”

The Day 2 of the DVD opened with the diggings now aided mainly by the backhoe. It was on the second day that the retrieval operations teams dug up the vehicles, which were also dumped into the grave in an apparent effort to hide evidence.

In Koronadal City, a Maranao vendor said he has run out of copies of the DVD.

He said they have been selling it for P120 per copy, and even bragged about the clarity of the DVD he sold as the material was taken by members of the Scene of the Crime Operatives of the Philippines National Police.

“I’m expecting my order to arrive anytime tomorrow. The one you’re holding is a clear copy because members of SOCO filmed it,” he said in Filipino.

Janice Cabasag, 29, a resident here, told the Inquirer that she managed to procure a clear copy from a vendor for only P70.

Cabasag said the DVD contained footage of the actual retrieval of the bodies in the village of Salman.

“Looking at those images of death, I can feel the pain of the families who lost their loved ones. Those who did it are demonic,” she said.

Mario Alasin, who maintains a small restaurant here, also told the Inquirer that his staff bought a copy, but he had refrained from seeing the footage.

In Parang town in Maguindanao, Norma Cantal, admitted she bought the same copy at the public market.

When asked about the sale of the DVD, Corazon Cabillio, wife of slain journalist Jimmy, said she has heard about the DVD but has not seen a copy. Cabillio said she was interested in getting a copy.

http://newsinfo.inquirer.net/breakingnews/regions/view/20091228-244373/Bootleg-DVDs-of-Maguindanao-massacre-on-sale
Posted by Pirates of Carriedo at 7:07 PM