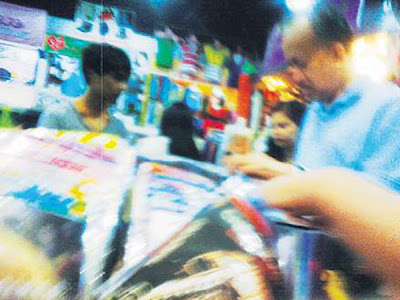 Someone in the Aquino Cabinet, it seems, is into collecting hot stuff.

More than three months after a high-power assault rifle police discovered in his SUV put him on the spot, Ronald Llamas, presidential adviser on political affairs, may need some more explaining to do.

This time, for apparently ignoring the government campaign against movie piracy.
This writer personally witnessed how Llamas bought a stack of pirated DVDs in one of the stalls at Circle C mall on Congressional Avenue, Quezon City, on Monday night.

With his two barong-clad security aides hovering nearby, Llamas seemed unfazed by the people who recognized him as a Palace insider as he browsed through the illegal merchandise.

Llamas took his time picking his titles, from 7:30 to 8 p.m. He was accompanied by two women who also bought a few DVDs for themselves.

After paying for the merchandise, he and his companions casually left the stall and headed to the nearest escalator, toting their purchases discreetly in black plastic bags.

A check with the stall vendor revealed that Llamas bought almost P2,000 worth of DVDs that night.

“It’s not a big purchase, but it’s Llamas,” the vendor told this writer in Filipino.
Repeated phone calls and text messages to Llamas on Tuesday remained unanswered at press time.

No penalty for buyer

Told of the Llamas sighting, Optical Media Board chairman Ronnie Ricketts was not too happy.

Ricketts conceded that the government could not do anything about it when someone—even a Palace official—buys pirated DVDs because the country’s antipiracy law imposes no penalty on the customer.

“There’s no law penalizing those who buy it just for their personal use,” the OMB chairman explained.

But if “eight or more copies were bought, that is another thing,” he said. “That could mean the buyer was engaging in business himself,” he added.

A few other shoppers who recognized Llamas, when asked how they felt upon seeing a prominent government official buying pirated DVDs, didn’t hide their disappointment.

“Now I know why I should not expect our government’s campaign against piracy to make a dent. If a government official has no fear or qualms whatsoever about buying pirated materials, what more the ordinary people?” said Estrella Panti, a regular Circle C shopper.

“I will not think twice about buying pirated copies anymore considering that a government official like him is doing it. He has the money for it, so do I. But on second thought, I’d rather not,” said another shopper, Ebet de Asis.

“Obviously what he did was illegal and the President might again come to his defense, like what happened when the public found out that he was keeping an assault rifle,” said a man in his 50s who asked not to be named for security reasons.

In October last year, Llamas came under fire after his Mistubishi Montero, then being used by two of his security aides, figured in an accident on Commonwealth Avenue in Quezon City—and yielded a Czech-made CZ-858 Tactical semiautomatic assault rifle in the ensuing police investigation.

Initial media reports mistakenly described the firearm as an AK-47. The accident happened while Llamas was attending a United Nations conference in Switzerland.

He later admitted having licenses for three handguns and two long firearms, but maintained that he had strictly instructed his aides not to take the guns outside his house while he was abroad.

Malacañang also helped Llamas, a shooting range buddy of the President, explain why he had to heavily arm himself, citing the nature of his Palace job.

Police cleared Llamas of any criminal liability but charged his security escorts with illegal possession of firearms.

Ricketts expressed hope that public officials like Llamas would set an example to the public, especially since the Philippine government is striving to be stricken off the international “piracy watch list.”

“I’m hopeful that my fellow government officials would realize this and set the example themselves. Maybe they don’t realize the consequence when they buy pirated DVDs,” he added.

In September 2011, a report by the Washington-based Office of the US Trade Representatives (USTR) listed the Philippines as one of the top 29 countries teeming with pirated or counterfeit goods, including DVDs, that are openly hawked in the streets and commercial centers.

The USTR noted with concern the ineffective enforcement of intellectual property rights in the country. The Philippines was also included on the USTR watch list in 2010. With reports from Bella Cariaso, Norman Bordadora and Inquirer Research