Good Earth Plaza: After the Fire 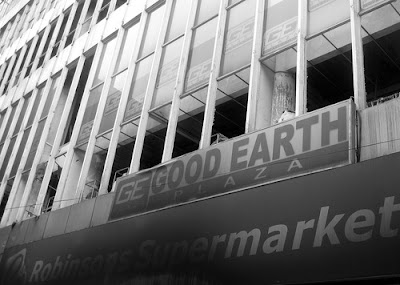 Those who grew up in Manila during the '60s will remember that Good Earth at the corner of Avenida Rizal and Bustos Street was the largest and first department store along Avenida that boasted having escalators in the building.

My brothers, cousins and I used to go to its coffee shop for a late morning merienda after attending mass at the nearby Sta. Cruz Church. I always ordered the shrimp salad sandwich served on toasted white bread.

However, I don't remember having bought anything at Good Earth. Ready-to-wear clothing was not popular back then as they are now; the trousers and button-down polo shirts I had were custom-tailored with fabrics purchased separately at Central Market. Also, my eldest sister who was then studying in Chicago used to send me Banlon and other knit shirts.

The building that was once Good Earth is now Good Earth Plaza which houses several establishments, including a motel on the sixth floor; unlike when it originally opened as just one huge department store. And at dawn last Monday, it was gutted by a fire.

According to a PDI article, it took firefighters nearly 22 hours to put out the blaze; finally extinguishing it at 3:00 am, Tuesday. The arson investigation division of the Manila Fire Department suspected the fire stemmed from pieces of rubber in the first floor of the building. Chief Inspector Myra Bico roughly estimated damages to property at P26 million.

Although only the ground floor and basement of the eight-story building were damaged in the fire, thick smoke and intermittent rains made it difficult for firemen to battle the blaze. The fact that most of the stalls inside the building were closed made the job even more arduous.

The building's close proximity to the LRT's Carriedo Station forced the LRT 1 that runs above Avenida to suspend operations, then cut in half. Full operations only resumed the following morning, Tuesday.

Meanwhile, according to a GMA News report, the office of DOTC Undersecretary Guiling Mamondiong is considering filing a P700,000 damage suit against the owner of the Good Earth Plaza building. The P700,000, Mamondiong said, represents the amount of lost income for the disruption of the Light Rail Transit Line 1's operations.

On Tueday afternoon when these photographs were taken, many stall owners were in the vicinity to ask the authorities when they could possibly enter the building to collect whatever undamaged property and inventory they might have left. And sadly, many who used to work in the building also milled around to learn about the status of their employment.
Posted by Pirates of Carriedo at 12:42 AM