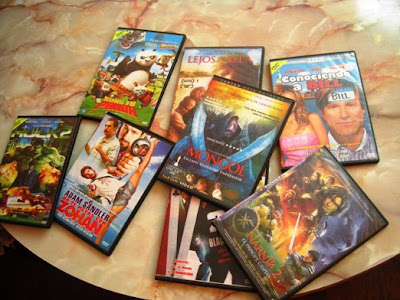 One of the great things about living in a developing country like Peru is that you can buy DVDs of new movies for a very low price. For instance, if you want a DVD of The Dark Knight, the new Batman movie, you can already buy it here. Not too shabby, eh?

Of course, you cannot be a stickler for quality with such DVDs, or you will be sorely disappointed. But if you like laughing along with audiences, wearing a hearing aid while watching movies, or pride yourself in your non-humble ability to tell people to sit down and shut up in the theater, then I’ve got a Kungfu Panda DVD that will be perfect for you.

It will probably come as no surprise to you that these kinds of DVDs are made by pirating businesses who use digital cameras to record new movies in theaters. They then distribute them quickly to the masses for profit. Peru, as well as many other developing countries where pirated DVDs are sold will unquestionably suffer over time from the pollution these DVDs will cause. To better understand why the environmental effect of DVDs will be proportionally greater in Peru than in a country like the United States, read on.

In Peru, it’s virtually impossible to rent a DVD. Why?

As there is a high level of poverty in Peru, the only way vendors of movies can make some cash is by selling DVDs that are cheap. The current rate in Peru is about 3 nuevos soles per a DVD. The exchange rate is currently 2.8 soles/$1 US. You do the math.

It almost becomes ridiculous to think how much Americans will pay to own new DVDs. I myself don’t care to own DVDs, as I generally don’t plan to watch movies more than once, with a few exceptions. So I would almost always prefer to rent movies than buy them. In Peru I have little choice though, because renting movies is virtually impossible given the low cost of pirated DVDs.

There are only a handful of stores where you can rent movies in Peru, and there is also not a DVD rental company that uses mail like Netflix. Believe or not, after coming to Peru I have begun to understand that stores that rent movies in the U.S. and other countries actually play a big role in environmental protection
Posted by Pirates of Carriedo at 4:45 AM